Installation of Base Stations and Radiation Safety The rollout of 5G services needs the establishment of an extensive network of radio base stations and small cells to support very high-speed data transmission and ubiquitous coverage. To better understand radiation safety of mobile base stations and 5G mobile phones, please read the information below:

What is
non-ionising radiation?

According to the professional advice from the Department of Health (“DH”), non-ionising radiation (“NIR”) differs greatly from ionising radiation such as X-rays, nuclear radiation, etc. NIR is a type of electromagnetic radiation which has low energy that cannot change the chemical property of substances nor break the chemical bonds of human bodies to cause harm. The radiofrequency electromagnetic fields generated by radio base stations (including 5G base stations) for the provision of mobile services are a type of NIR. Other examples of NIR commonly found in our daily life are radio and TV broadcast, light and infrared rays.

The energy associated with electromagnetic radiation depends on its frequency – the higher the frequency, the greater the energy:

Radiation safety of base stations

The CA has, according to the professional advice from DH, adopted the NIR limits recommended by the International Commission on Non-ionizing Radiation Protection (“ICNIRP”) as the radiation safety standard.

The ICNIRP is an independent scientific commission. Its recommended NIR exposure limits are recognised by the World Health Organization (“WHO”). According to WHO, there is insufficient evidence to suggest that exposure to non-ionising radiation (including radiofrequency electromagnetic fields) below the exposure limits recommended by ICNIRP will cause any adverse health effects.

The ICNIRP limits or similar requirements on NIR safety standards are widely adopted by developed economies such as the United States, Canada, Germany, France, Australia and New Zealand, and economies with dense population such as Singapore, Japan and Korea.

Members of the public may call the hotline of OFCA at 2961 6648 if they are concerned about the non-ionising radiation generated by the base stations in their neighbourhood. OFCA will conduct on-site measurements of radiation levels upon requests by members of the public and explain to them the measurement results. Also, OFCA will initiate sample checks on the approved base stations to ensure that their non-ionising radiation levels comply with the safety standards.

Mobile communications devices in operation generate radio frequency (RF) electromagnetic field which is a type of NIR. In contrast to ionizing radiation such as X-ray, NIR has lower energy which is insufficient to change the chemical properties of substances or to cause harm by breaking chemical bonds inside the human body.

With the advent of 5G era in Hong Kong, consumers may now use the new generation of mobile telecommunications services for higher speed and lower latency. It should be noted that NIR generated by 5G mobile phones is technically no different from the mobile communications devices supporting the previous 2G / 3G / 4G generations of mobile technology (the legacy generations). Most 5G mobile phones operate in the sub-6 GHz bands and have electromagnetic characteristics same as those of the legacy generations.

All mobile phones including 5G and legacy generations of mobile communications devices for sale in Hong Kong shall meet the technical requirements prescribed by the CA. They shall all comply with the radiation safety limit as recommended by the ICNIRP. According to the WHO, there is no harm to human health if the NIR level is below the ICNIRP’s limit.

As far as NIR generated by mobile phones is concerned, 5G phones are on a par with those of the legacy generations and are safe to use. OFCA operates a voluntary labelling scheme for mobile phones under which manufacturers, suppliers and dealers are authorised to affix a label as shown below to mobile phones which have been evaluated to be in compliance with the technical requirements, including the radiation safety requirement, prescribed by the CA. If a consumer wants to be sure that his equipment meets the safety standard, he may choose a mobile phone with the label prescribed by the CA.

For more information on the RF radiation safety issue of mobile phones and services, please visit the website of OFCA. 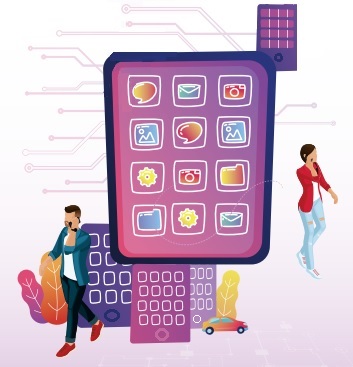